It was almost like the start of a joke: an Afghani, an Australian, an Englishman, an Englishwoman, a German, four Indians, a Pakistani and a Sri Lankan go to Oldenburg to play cricket.

But this was no joke. This was the THCC first XI, arguably the most diverse team ever to take the field in German cricket, and they represented the club (surely Germany’s most diverse cricket club) extremely well. The team was competitive all day, played with great spirit and had lots of fun. If a few catches had been held and there had been some more sensible batting, THCC might have pushed for an unlikely victory.

In many ways, it doesn’t matter. Yes, when players take the cricket field, they play to win. But when a team gives their collective best, plays in the true spirit of the game and gets lots of enjoyment from the match, then even in defeat, they can walk off the field with their heads held high.

To say that winning is everything is to undermine many of the reasons we start playing sport to begin with. As children, we hit cricket balls, kick footballs and bounce basketballs for enjoyment. It’s fun. Unfortunately, this is something that gets lost in adulthood, as more emphasis gets placed on winning.

For the Ancient Greeks, sport played an important role in education and personal development. They held the belief that sport helps to make better people. It promotes excellence (what the Greeks called aretê) in individuals, and this excellence could then be applied to almost any endeavour in life.

The records of German cricket will show that on 9 July, 2016, MTV beat THCC by 47 runs. But what those records won’t show is the sheer enjoyment of the THCC players: Imran’s surprise after executing his missed-caught-and-bowled-one-hand-falling-down run-out; Bipin bowling with guile and smarts to finish with 3/15 off ten overs; Emil running into bowl with the biggest smile ever seen on a bowler; Tina out-smarting a crease-hopping MTV batsman to clean bowl him and send him scampering from the field; Steve staging a one-man “Occupy Oldenburg” protest, to bat 47 overs and finish not-out on 81; Steve and Moritz’s entertaining and unbeaten last wicket stand of 40; and even after nearly 100 overs of cricket, on a day that started with a two-hour journey just to get to Oldenburg, the THCC players were still smiling and laughing and enjoying the day. Fantastic.

Well done to MTV. Many thanks to Kashyap and Pavithira for scoring, and for supplying laughter and smiles from the scorers’ desk. And thanks to Abdullah and Asad from Göttingen who did a really great job umpiring. 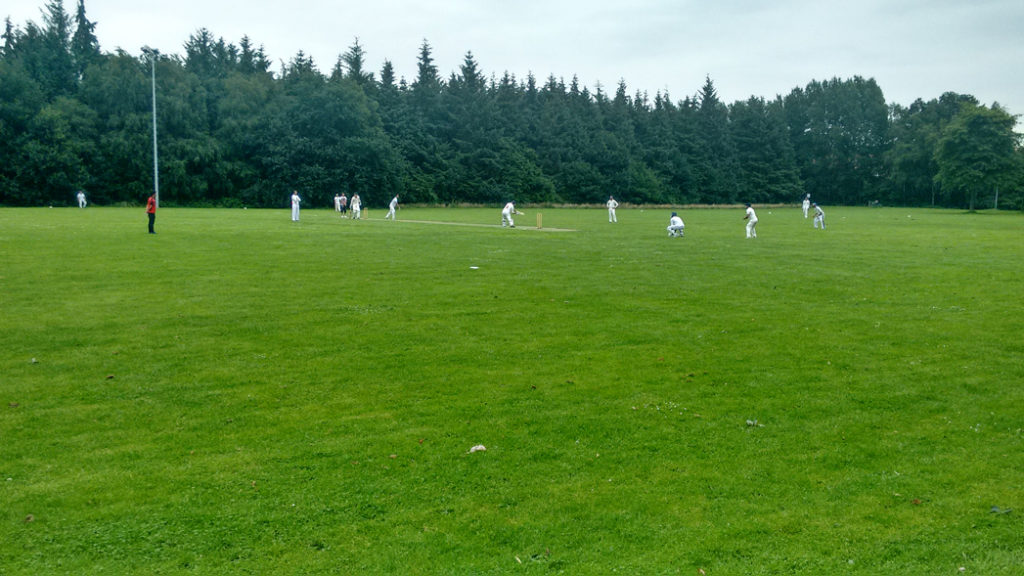 Steve and Moritz defy MTV right to the end, as a very attentive mid-wicket watches on.