The Australian leg-spinner Shane Warne has often said that cricket is a simple game. “Just go out and play.” This is precisely what THCC’s young opener Asad did, starting his innings in light rain against undefeated HSV. Asad kept it simple, and just went out and played – all the way to his maiden century.

It was a fantastic innings, including 13 fours and 5 sixes, and it was great to watch, especially as Asad is a U19 player. It’s always very satisfying to see the club’s young players do well.

He got brilliant support from Murali, who crafted a half-century of his own. The pair put on 166 for the third wicket against the league-leading HSV team, and helped THCC set a formidable total. Steve and Israfeel also batted well to get the score up to 303, setting HSV the challenging task of maintaining six an over for their 50 overs.

They didn’t start very well, with Usman caught by Murali at short leg in Bipin’s opening over, and N. Ahmed out LBW in Bipin’s second. Dushant and Umeer played aggressively, putting on 48 in six overs, with Umeer looking particularly dangerous. But skipper Cam made amends for an earlier dropped catch to nab an Umeer lob, for Bipin’s third wicket. And when Henrik caught Dushant off Bipin, there was a strong sense the match was almost over.

This turned out to be correct. The next three wickets fell for just 11 runs, with Cam picking up two and Bipin completing his “Michelle”. Raju hit some big shots for a quick-fire 29, but it was not nearly enough, with Safi and Henrik getting the last two wickets.

Earlier in the season, THCC lost to HSV on the back of a superb one-man performance by Bilal Jafar. Today, it took an all-round team effort from THCC to hand HSV their first loss of the season. Shane Warne would be proud, because THCC kept it simple: the batsmen made the runs, the bowlers took the wickets and the fielders held the catches (eight out of nine wickets were caught).

In the annals of THCC history, this win goes down as one of the best. In years to come, people will say that they were there when Asad scored a ton, when Bipin took five-for, and when THCC beat HSV by 171 runs. A great day of cricket, also well-umpired by Khalid and Samiullah from SC Europa.

THCC wishes HSV all the best for the rest of the Bundesliga season. Many thanks to lone scorer Moritz, and to Frank S. for the big umbrella. Thanks also to all the supporters and club members who braved the bad weather and lent their support. 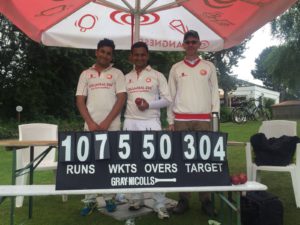 The scoreboard tells the tale: Asad 107, Bipin 5 wickets, THCC setting a target of 304