While starting the season with three losses, the THCC Regionalliga team was playing with great spirit and enjoyment, and had shown improvement with each game. The team went to Bremen to face SG Findorff 2nd XI with high hopes of returning to Hamburg with their first victory of the season.

It started well, with skipper Shane winning the toss and deciding to bowl, to take advantage of the window of opportunity made available by the clear skies. Kamal and Khalil opened the bowling, with a great display from both of them. They took early wickets, removing some pretty good batsman.

Imran and Safiullah continued the good bowling. Imran distinguished himself as the best bowler of the day, taking five wickets and achieving his personal best figures for THCC. Nabeel also came into the attack to take some good wickets.

At this point in the game, THCC were looking at keeping SG Findorff under 100 runs, but due to some big hitting at the end from Aziz (57) and Jashid (31), and some really poor catching from THCC, these batsmen ended up with some extra batting lives and got their team to a defendable total of 162.

THCC started their innings with youth and experience, as new youngster Mohibullah opened with Adrian. They did an excellent job of taking the shine off the new ball and keeping their wickets. Eventually SG Findorff’s bowlers made a break through and THCC lost some wickets. Nabeel steered the ship and got some great batting support from Khalil. The pair built a vital partnership to bat THCC into a winning position.

At 120/4, THCC had the match in control and victory was within reach. But when Nabeel was out for 49, it triggered a batting collapse. THCC lost five wickets for five runs and the only batsman still standing at the end was Jens.

It was a hard loss for THCC after coming so close, and the team will rue the dropped catches during SG Findorff’s innings, but lots of good things came from the game. This included our new players Saied and Mohibullah, who did really well for the team, Imran’s bowling and Nabeel’s batting.

Some really good cricket was played by both teams on the day and it ended up being a nail-biter in the end. Well done to SG Findorff. We wish them all the best for the rest of the season. 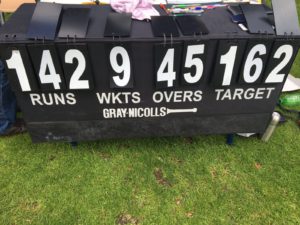