On a windy day in May, THCC gladly obliged Husum CC and drove up to play on their outstanding field (sightscreens! long boundaries!) just north of Husum. It was a fantastic day of cricket, played at a very high level and in a wonderful spirit, with THCC proving more than up to the standards of a team which plays in the elite Danish league.

In fact, we probably should have won. Chasing 212, THCC needed 57 runs from nine overs and had seven wickets in hand. 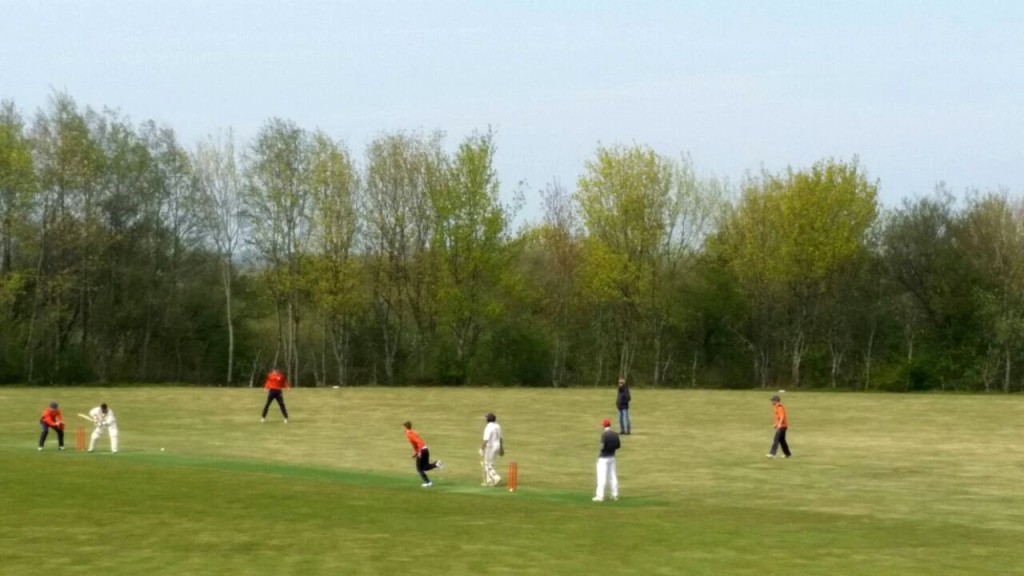 Trived on strike with silva at the other end.

But let’s back-track a little, because 25 overs into the match, THCC were barely in the contest at all. Husum had cruised to 3/140, with opener Gerrit Müller striking the ball sweetly, and were looking set to post upwards of 250 from the allotted 40 overs. But Israfeel bowled a wonderful second spell, working in tandem with Cam to take 4/27 in an eight-over stretch that swung the momentum THCC’s way. It’s worth adding that on top of the four wickets, both bowlers generated chances, with inside edges, dropped catches and lofted balls just out of reach of fielders. A little luck and better fielding may have seen Husum dismissed for 170 or 180.

Instead, Husum showed impressive mettle to hold firm and reach 9/212. THCC’s bowling was much improved on previous weeks, with just 8 wides. Disappointing was that the fielding didn’t quite match the efforts of the bowlers.

Looking at a bit more than five an over, Dominique and Cam got the run chase off to an excellent start, seeing off the opening bowlers and getting the score up to 54 off 12, before a surprising ball cut back on Cam and cut him half, bowled between bat and pad. Dom was a diligent as ever, and he and Raman put on 46. Trived also hit some solid shots for a quick-fire 38 that moved THCC into a seemingly winning position, with the top four combining for 132 runs.

But Dom, Raman and Trived all got out to miss-hit shots, as did Silva, skying the ball and the quality Husum fielders held the catches. Still, 52 from seven overs with five wickets in hand, was certainly doable. Husum had a defensive field set, and all the batsmen need to do was push the ball into the gaps.

Israfeel showed promise, hitting a big six, but was somewhat unfortunate to be given out LBW (this was a friendly match after-all). Bipin and Steve batted intelligently, running hard for ones and twos, until Bipin was run-out from a direct hit. Poor calling led to two more run-outs and tight bowling at the death meant Husum held on. Kamal hit a six and a four from the last two balls, resulting in Husum winning by just 11 runs.

Husum were worthy winners, displaying the experience and composure to take control of the match when it mattered. From that, there are some good lessons for THCC: the importance of being switched on and concentrated for the full innings, understanding the state of the match and playing accordingly, keeping calm when the match gets tight, taking your game to another level when required, and of course, that catches win matches.

Many thanks to Husum CC for a great day of cricket. Husum are a strong cricket team and we wish them the best of success this year in the Danish League. And we certainly hope for a re-match in the very near future.

Thanks to Jörg Krüger (Husum CC) and Mark Richardson (THCC) for organising the match, and thanks to Mark for scoring.