THCC Ladies stay in until the end 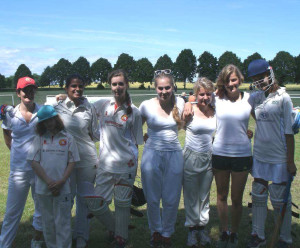 A heavily depleted Ladies team travelled to Damshagen, the hub of Mecklenburg cricket, on this sunny Sunday. At the beginning of the week it had still not been clear whether there would be enough players as injuries have struck some of the key members. But cricket in summer is a very enjoyable pastime and word has spread that THCC Ladies make new conscripts especially welcome integrating them into their friendly team. That is why players now start bringing their friends in support of ladies cricket. So once again they could recruit two newcomers on Saturday, Emily and Zoe, and thus were able to play their first away game. Of course this was not the strongest team THCC Ladies has fielded so far and with only eight players they had little chance of winning. But this time they managed to stay in and cling on to their wickets. Nobody got out first ball and everybody defended their wickets well, so that Emily and Avni did not even have to bat after all. Dilani and Marlene as openers and Galini and Rebekka at the end all made some valuable runs. Zoe, in her first Bundesliga match, would also have contributed, had she only had a bit more confidence – there were a couple of chances, but she played it safe, fair enough. And of course Galini and Rebekka, the two not-outs, could have risked some more at the end of the innings with two wickets still in hand. Top-scorer was again Charlotte at no. 3 with 13 runs until she was given out lbw to a straight ball from Kirstin, Damshagen’s best bowler of the day, who claimed 3 for 22. With 113/4 the ladies had reached their highest total in the season. Would they be able to defend this?

The main problem was now the bowling line-up. With Galini too small for the long pitch, there were only four ladies who knew how to bowl. So if each of them used their maximum of four overs, what would they do with the remaining four? At the end, this question could be left unanswered. With Meike hitting a confident 29*, Antonia 10* and a heap of extras, THCC Rot-Gelb Ladies are supported by Damshagen reached their target already in the 15th over. THCC Ladies, however, impressed with some good fielding team work. Avni took a splendid catch off Marlene’s bowling, Galini convinced behind the stumps until she was replaced by Rebekka, and all fielders chased every ball coming their way and got it back straight to the keeper, especially Emily at mid-on, but also Charlotte at mid-wicket. Captain Dilani permanently encouraged her team and also delivered the best bowling performance conceding no extras in 3.5 overs for-15 runs.

This was the penultimate league match of the THCC Ladies team in 2014. On paper, they have one more chance to win, namely away against Hannover/Göttingen next Saturday. This may seem unlikely as those opponents have three national players in their team. Still, anything can happen in a cricket match. So keep your fingers crossed and wish them well! They deserve every support they can get – for many reasons.