THCC ladies cricket does exist, after all! Against the odds on a sunny Sunday in May, Germany’s presumably largest cricket club proved they can raise 11 ladies, who can bat and bowl. Moreover, this young squad, which had not existed a mere four months before, convincingly demonstrated how to play the game. Under the eyes of an ICC delegation from the UK, the DCB manager and the DCB ladies coach, THCC’s cricket officer and spectators from as far away as Sri Lanka, their premiere was a huge success. The ladies may not have won their two T/20 matches. That had not been expected, at least not by their coach, since both opponents had considerably more experience. But THCC Ladies had enormous fun as a team, scored a boundary, ran several runs, bowled a maiden over, held two catches, bowled three opponents and got one out leg before; there were no overthrows and they managed a couple of decent run outs. What is more: You could see them improve from over to over as their confidence grew. In their later game the ladies scored more runs off the bat than the other team and none of them got run out. Their tally increased over the matches and they were able to reduce their second opponent to fewer runs as well. If this goes on like it went – where will it go? 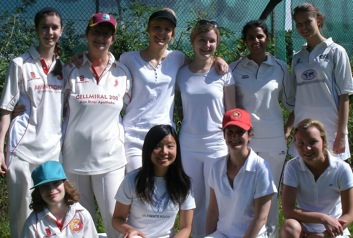 The ladies coach took pride in all players’ performance: Antonia bowled two opponents and opened the batting. Birte impressed with her solid wicket-keeping and scored in both innings. Charlotte bowled a maiden over and got a nice run out off her own bowling. Captain Dilani took two wickets whilst bowling most economically. Eve, who had only started to play cricket the day before, ran unafraid and achieved another splendid run out. Galini, the team’s most junior player, saved several boundaries and runs with her excellent stops and returns. Heike, the only lady to have witnessed Ambrose and Walsh in action, got a scalp with her very first ball in Bundesliga cricket after a successful lbw-appeal. Kathrin took a wicket together with Avni, who held on to a surprise catch. Marlene, the other opener, kept her wicket for more than ten overs, scored nine runs including a boundary 4 to fine leg and also made a catch. And last, but not least, stalwart Bianca supported the batting in both matches and reliably added runs. This was a visibly great team effort from all THCC ladies, especially in the field.

Other participants who deserve mentioning are Aswin, Mark, Komal and Cam, who umpired and scored, as well as Kerstin, who took photos. Aswin liked the ladies’ team spirit so much that he kindly offered his support for future training sessions. The DCB ladies coach invited one player to the next training camp of the national team. The DCB manager and his English visitors were very impressed by the ladies cricket in Hamburg Klein-Flottbek. And there is more good news from the club perspective: THCC Ladies have now got their own sponsor. Next time you see them play, they may wear their new shirts already. THCC Rot-Gelb has lots of reasons to be proud of them!