In cricket, like in all sports, you’re never far away from a cliché. “We’re going to turn the tables,” or “we’re giving 110%,” or “we’ve got our backs against the wall,” or something like that. The cliché best describing the May 17 match against Hannover: “A week is a long time in cricket.” 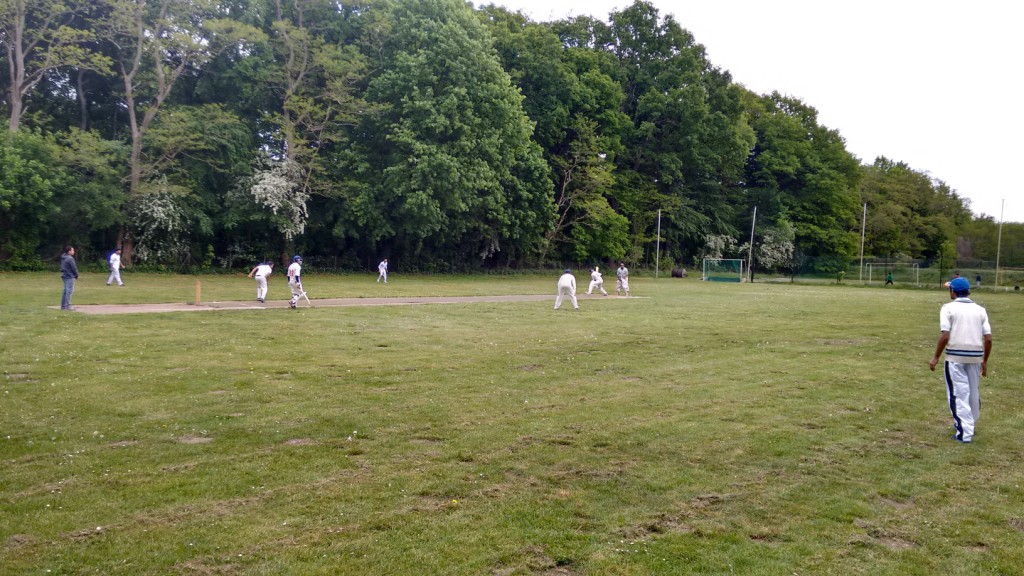 Seven days prior, Hannover had taken the long handle to THCC, on their home ground, piling up 352 runs and winning comfortably. Could THCC, with their backs against the wall, give 110% and turn the tables?

Again, the toss would prove pivotal. THCC won and chose to bat on a firmly rolled deck with coconut matting on top. It was a bouncy wicket, and the ball was moving in the air. The third ball of the innings leapt off the pitch, took an edge off the shoulder of Dom’s bat, and the keeper held a good catch.

Sandeep joined Cam at the crease and the two set about stabilising the innings. Cam again showed promise, moving quickly to 24 only to be out LBW on a ball the Hannover team barely appealled on. Trived played a couple of fine shots before also falling victim to an LBW decision. At the other end, Sandeep was resolute and in form, but he needed someone to go with him. In Raman, he found a willing partner, and together they put on 81 to move THCC into the strong position of 3/162 off 26 overs.

Given the circumstances, Sandeep’s 57 was an excellent innings. He was eventually out LBW, and Raman was caught, but they had done the hard work to provide the platform for Israfeel’s strong hitting in the second half of the innings. Israfeel would make a wonderful 67 not-out, putting on 101 with Imran (28) for the eighth wicket, while last man Shane would finish with the maximum strike rate of 12 off two balls.

Raj was again the pick of the Hannover bowlers, with 2/29 off his ten. Suraj took three wickets, including the pearler that dismissed Dom, but he let himself down with wides. In the end, Hannover gave up 60 free runs in wides, and a couple of hot chances went down. Things could have been very different for THCC had those catches been held.

9/318 was a solid score, yet it was certainly getable, given the smallish Hannover ground and the fact the team had scored 352 the week before.

But a week is a long time in cricket. Israfeel took a great catch off his own bowling and Dom showed impressive athleticism to run-out Arun, together with Trived’s quick hands behind the stumps. And when Israr was bowled by Bipin, Hannover were on the back-foot at 3/35. Opener Prashant showed stoic resistance, hitting some good shots to make 48. It took a sensational catch by Israfeel at second slip, off Safi’s bowling, to dismiss him.

That catch really set the tone for the rest of the innings, as it gave Safi the confidence to take two more wickets on his way to team-best figures of 3/23, and the fielders also lifted, with Raman and Bipin both taking good catches. Jatin made a welcome return to the team, taking two wickets, while Sandeep bowled a superb five-over spell that yielded 1/13.

THCC were winners by 207 runs. It was just fantastic to see the players respond to the loss of last week and deliver such a complete performance, in what amounted to a 371-run turnaround. Well done, lads. And big thanks to Aman for scoring.

Many thanks to Gaurav, Jay and the Hannover team for being such warm and welcoming hosts. You have a strong team, made up of a really good bunch of guys, and you play the game in the right spirit. You’ll certainly get back to winning form against HICC in two weeks. If a week is a long time in cricket, two weeks is even longer – time enough to turn things around.