A mix-up in the schedule saw two Hamburg teams travel to Bremen, with SG Findorff kindly allowing HICC to use the Bremen ground for their home game. Even better: SG Findorff supplied two outstanding umpires who did a fantastic job, ensuring the game was played fairly and in the right spirit.

Under blue skies and with the warm temperature promising a batsman’s wicket, HICC won the toss and told THCC to put on hats and sunscreen, and go out to field first. Israfeel and Marvin opened the bowling, generating good bounce on the dry wicket. The HICC openers came out swinging, taking 26 from the first two overs, before Shanthaian was well caught by Henrik of Marvin’s bowling and Israfeel rattled the stumps of the hard-hitting Khan. 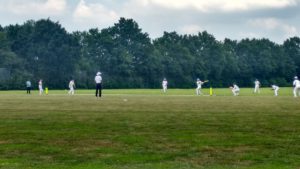 The doctors are in. Steve and Murali steady the innings and put THCC on course for victory

From there, wickets fell at regularly intervals, with all the bowlers getting amongst it. Vohra hit some big shots, getting to 22 from just 9 balls, but was caught on the boundary by Israfeel off a clever slower ball from Safi. Cam dried up the runs down as Manjunath and Pal Singh tried to stop the flow of wickets. THCC were a bit sloppy in the field, letting some fours and overthrows get through, and dropping a few catches. But Guru was excellent in the gully, and his second catch removed Manjunath.

Cam had an interesting battle with Pal Singh. The HICC captain survived a few LBW appeals (which was good, because none of them were out), and swung and missed a lot. Cam eventually clean bowled his opposite number by a ball that was only just outshone by the one Marvin bowled to skittle K. Singh’s stumps, out for a golden duck. THCC ground out the last few wickets, with Israfeel completing a one-handed caught-and-bowled, and Cam getting the last.

Chasing 140, the heat was on early, with Cam and Chandan both mis-hitting pull shots to be caught at mid-wicket, and Sandeep nicely nabbed at first slip by Manjunath. At 3/17, Murali and Marvin built a small partnership, with Marvin cracking a few big hits on his way to 18. The THCC middle order, a weakness last year, got the job done, with Steve batting through to finish 20 not out, Murali making 23, Israfeel contributing 26 and Guru hitting the winning runs. Extras top-scored with 37 and THCC got the win with four wickets to spare.

THCC wishes HICC all the best for the rest of the Bundesliga season. Many thanks again to Moritz for scoring. Thanks also to SG Findorff for supplying excellent umpires and allowing HICC to use their ground in Bremen.