Cricket is a game of centimetres: a ball can miss the stumps by such a margin or fall just out of reach of a fielder’s hand, and a batsman can be run-out or stumped by a centimetre. It’s also a game of luck: the toss of a coin to start the match, the inside edge that misses the stumps and goes for four, the batsman swinging with his head in the air and somehow connecting, and the umpiring decisions that can impact the course of the match.

“I don’t know why, but around the fourth over, I had the sense that it wasn’t going to be our day,” said THCC’s captain Cam, exhausted, drained and dejected, after the match. “It was a bad toss to lose, and things just didn’t go our way in the field. Credit to our players, who fought hard despite the circumstances, especially Asad, who bowled really well, and credit to MTV, who were deserving winners. But I thought a centimetre here or there, and a bit of luck, and we would have been well in the game.”

MTV won the toss and decided to bat. Bipin was tight, getting Suraj LBW early with a ball that swung back in. Israfeel was a bit wayward for three overs, and his replacement Cam was no better, going for 26 in three rubbish overs. Hosen and Potharlanka got set, with MTV’s number three batsmen making a fine century. He was also well supported by Israr Khan (53).

Unfortunately, as the runs piled up, THCC couldn’t take a break in the field. Some sharp chances went down, while there were plenty of lofted shots that were just out of reach. Henrik, Chandan and Murali were the standout fielders, as THCC tried very hard to limit the runs. But it was a long day in the field and frustrations started to show at the end.

Having reached 2/140 from 21 overs, MTV were on target to make 400. THCC did well to keep that total to 300, taking nine wickets in the end. The pick of the bowlers was Asad, who showed so much heart to bowl nine straight overs and take 4/40. Israfeel also showed great character and determination to come back and bowl a second spell that improved on his first.

Two weeks earlier, THCC put up 303 from 47 overs against the top team in the league. So, there was a strong sense that 300 was a reachable target. But as it was in the field, THCC felt the ire of centimetres and bad luck. Only Israfeel showed fight, hitting every shot in the book on the way to 92. His lone hand was not enough, and THCC were all out for 186.

THCC wishes MTV all the best for the rest of the Bundesliga season. Many thanks to scorer Moritz (and his book of laws). 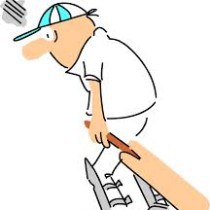 Cam wonders where it all went wrong.