The fifth game of the season got underway at HSV’s ground in Mümmelmannsberg, with the HSV Tigers winning the toss and deciding to bat.

Imran and Safiullah opened the bowling for THCC, and they maintained good line and length. But the HSV batsmen were looking to take advantage of the fielding restrictions and tried playing some shots over the fielders. Some good bowling and variation got THCC off to a great start with an early breakthrough.

From there, wickets continued to fall thanks to excellent bowling from second change bowlers Emil and Shane, who combined for seven wickets. Imran M was the only batsman from HSV to show some fight, hitting a fifty that included some big sixes. But when he was bowled by Emil, the resistance was over, and HSV were finally all out for 139, a total which included 34 wides.

Credit to the THCC bowlers, and to the fielders as well, with six wickets coming from catches. Youngster Mohibullah took an amazing catch and executed a direct hit run-out.

After the HSV Tigers generously provided lunch, openers Christian and Mohibullah got THCC’s innings going. Arshad was the pick of the HSV bowlers, and he removed Mohibullah in the first over, and trapped Christian, Nabeel and Jens LBW. Emil occupied the crease, and tried to get the scoreboard ticking with Safiullah, but when Emil was bowled and Hardeep was run-out, THCC were in a precarious position, at 6/70, with 70 runs still required.

In recent games, THCC had pushed hard for victory only to come up short. It was looking like the same would happen today. Until THCC skipper Shane joined Safiullah and they set about building what would become a match-winning partnership. Not even a short rain interruption could break their concentration. They got on top of the HSV bowlers, with Safiullah making a fine half-century. Together, they got the runs and the THCC Academicals deservedly earned their first victory of the season.

Some really good cricket was played by both teams on the day and it ended up being a nail-biter in the end. THCC wishes HSV Tigers all the best for their rest of the season and thanks once again to HSV for lunch. 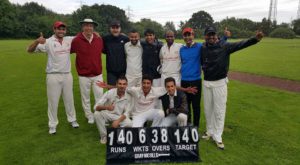