The second game of the season got underway on THCC’s home ground with the visitors winning the toss and deciding to bat in the rainy conditions. This match marked the debut of THCC’s new coconut mat pitch, which played brilliantly throughout the day.

The persistent rain made it hard for the THCC fast bowlers to control the ball. The SC Europa openers capitalised on the bowling and put on a great opening partnership, getting to 89 runs before Hendrik removed one of the openers with some good spin bowling. After the much-needed breakthrough, THCC bowlers Khalil, Kamal and Silva took wickets, and THCC also held some great catches in the field (Jens and Hardeep), but the runs kept coming. SC Europa A did a good job with the bat, getting to a very competitive score of 285/10. 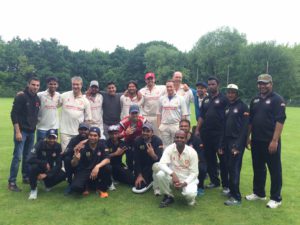 Play was stopped for an hour during SC Europa’s innings for rain, when all the players retreated to the THCC clubhouse for some hot soup (thanks to Frank S.). And the match was reduced to 45 overs.

With a big score on the board to chase, THCC had to keep wickets in hand for as long as possible. Unfortunately, Kamal fell early, putting THCC under pressure from the start. Khalil was looking in form before he was run out. Frank tried to steady the innings, but got bowled by a good ball. THCC was on the back foot with 65/5 on the board and SC Europa in total control of the game.

Enter skipper Shane, who tried his best to stop the flow of wickets. He got some good support from Hendrik, then put on 79 with Silva. With the wide tally already over fifty, and the rain having cleared, THCC could sense an unlikely victory. But when Shane was bowled and Silva was out not long after, the game slipped away. Aswin and Hardeep showed fight right until the end, getting THCC to a respectable score of 226/10.

Some really great cricket was played on the day and THCC showed some great determination and fight. Congratulations to SC Europa A and best of luck for the rest of the season.

Thanks to Vignesh from HICC, who did a very good job umpiring, to Safi for taking on the 12th man duties, and to Cam for scoring.