The third game of the season got underway on THCC’s home ground with the visitors winning the toss and deciding to bat. Kamal and Khalil started the bowling for THCC and got a couple of good wickets early on. The fielding of THCC was excellent, with great catches being held.

After being 5/117, SC Europa XI did well to get to 225, with Shinwari making a half century and getting good support from Hassan Raza (21) and Habibi (29). A strong team, SC Europa XI had in previous matches put up big totals when batting first, which meant THCC did very well to bowl them out for 225.

It was a getable target. Unfortunately, the run chase got off to a bad start, with Frank bowled in the first over and Khalil extremely unlucky to be given out LBW on a ball he hit for four (how does that happen??). Left-armer Farooq tore through the top order, to leave THCC reeling at 6/20.

The only batsman that took the fight to SC Europa was Silva, with a blistering 43 runs. He was well supported by Aswin, as the pair built a partnership and added respectability to the score.

But when Silva was out, well caught at first slip, the resistance ended. Farooq finished with 5/17 while Shinwari completed a fine all-round game with 3/21.

SC Europa played really good cricket on the day, with a great spirit on the field and off the field. THCC wishes them all the best for the rest of the season.

Thanks to the supporters who attended the match, and thanks also to Murali for scoring. 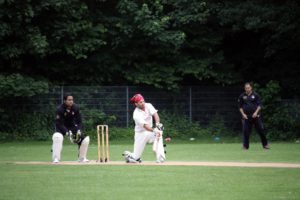 Bandanaman! Silva sends another ball to the fence for four during his swashbuckling 43 (photo by Bianca)