The game between THCC and Masroor got underway on THCC’s home ground in light rain. Skipper Shane won the toss and decided to bat first, giving Masroor the ball in wet conditions.

The THCC innings started badly, with Khalil out LBW first ball. Nabeel came in and built an important partnership with Mohibullah to steady the innings, until Mohibullah was bowled for 21. Safiullah joined Nabeel, and the two slowly took control of the innings. Masroor bowled very well, but Safiullah and Nabeel batted with discipline and smarts, with Nabeel giving good advice and support to his young partner as they put on 94 together to take the score to 2/137.

But when Safiuallah was bowled by Imran and Nabeel was run-out, THCC suffered a complete batting collapse, to be all out for 157. Full credit to the Masroor bowlers, who fought back hard, including left-arm spinner Usman and medium-pacer Imran, with both getting three wickets each.

After the break, THCC’s opening bowlers Khalil and Kamal both pushed a little too hard for wickets. The Masroor openers Shams and Imran quickly put on 26. It took a fine low catch by THCC’s Imran off Kamal’s bowling to remove Masroor’s Imran.

While several catches were dropped, some were held, including a good catch by Saied in the slips. Silva tied up one end, mixing it up with eagle-eye pace and hypnotic lobs, while Nabeel worked his off-spin from the other end. Wickets fell at steady intervals, with only Shams providing resistance, as he made 40. But when he was bowled by Nabeel, THCC looked to be getting the upper hand.

With Masroor at 5/92 and the captain removed, THCC started fielding more aggressively and showed that they were ready and willing to win this game. Silva continued his great spell, bowling 10 overs straight to finish with 3/29. Saied also bowled well, to pick up two wickets.

Things got really tight when Masroor was 8/122, and Ather and Maher were at the crease. These two former THCC players were keen for victory, but THCC were not to be denied. Saied bowled Maher, then he took a ripper of a catch in the slips, off Safiullah’s bowling, to remove Ather and finish the match, with THCC winning by 19 runs. 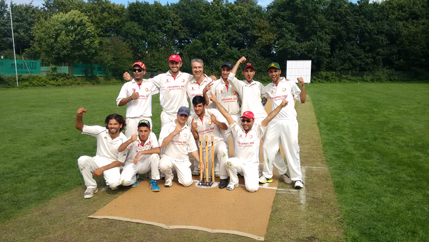 THCC did really well to fight back in the field and played well under pressure. Some really good cricket was played by both teams on the day and it ended up being a nail­-biter in the end. The match was also played in a great spirit. We wish Masroor CC all the best for the rest of their season.

Thanks to Samiullah from SC Europa for umpiring and doing a great job. Thanks also to Cam for scoring and to Hendrik for his support.

Let’s hope THCC can continue the fighting spirit for the rest of their season.