THCC2 started their season at home, playing their first Regionalliga game against MTV Stallions from Hannover. Shane won the toss and decided to bat due to the wet field. Against good bowling from MTV, the only batsman to show a bit of fight was Asad, who made 27. Wickets fell quickly, with the entire team on the bench for just 78 runs.

MTV Stallions started their innings with Kashyap (35) and Prutvhi (21*) building a solid opening partnership. Only one wicket fell before the target was reached, but THCC could have applied more pressure if they’d held their catches. Credit must go to Asad, Ali, Shane, and Emil who tried their best with the ball. 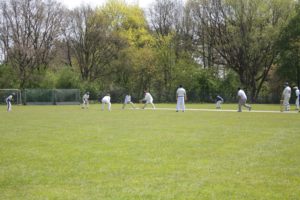 On a positive note, many of the THCC batsmen got bowled while playing straight shots, and were unlucky that the ball stayed low or barely bounced. The MTV Stallions also fielded a stronger team, which included some of their first team players, due to the first team having no game.

On an even more positive note, THCC won the T20 friendly played after the game. Chasing 158 and with THCC at 103/1, Khalil was retired and brought back at the end to hit the winning runs, leaving him with 71 not out and helping THCC win a nail-biting thriller.

This will surely give the team some confidence to take into the next game.

Also, special thanks to Bianca for scoring and for the photo.