Following on from the wise words of last match, this week’s Regionalliga Motto of the Week (patent pending) is a village cricket favourite, “Catches Win Matches”. This is a saying that the Accies will be only too aware of, having seen their dropped catches tally creep into double figures in recent games. However, with an increasing focus on fielding at training, Captain Shane was confident that his team could register another win against SC Europa A in Mümmelmannsberg. Our optimism grew when, on arrival, the team was delighted to see that the grass on the outfield had received a much-needed and long-overdue haircut.

SC Europa won the toss and elected to bat first. Safiullah continued his fine form with the ball from the last match by starting off his spell with two maiden overs, ably supported by Khalil at the other end (actually, the same end, but more of this later…). After a period of sustained pressure from our opening bowlers and tight fielding with Hannan cutting off anything that came his way at fly slip, the breakthrough came in the 8th over when the big-hitting Abdul Khan, who had proved a dangerous batsman when we faced him in the T20 tournament, was expertly caught and bowled by Khalil, despite Imran’s best efforts to put him off! As is often the case in cricket, one wicket follows another, and this was true again here as Safi’s brilliant spell of bowling was rewarded when he clean bowled SC Europa’s number 3. Tina then joined in on the action not too long after when, (feeling not so) fresh from national team duty in Rotterdam the previous day, she sent the other opening batsman packing in her first over with one of her infamous inswinging yorkers. Her second wicket soon followed when she had SC Europa’s number 5 caught behind thanks to a very smart catch from Mohibullah.

At this point, SC Europa were on 62-4 but still looking dangerous with their captain, Umar, hitting some powerful boundaries and building a partnership with Sahil. Trying to wrestle back the initiative in the game, Shane turned to Saied to throw down some of his spin in the hopes of restricting the boundaries and getting the breakthrough. Tina was holding down one end well, with the SC Europa batsmen visibly terrified of getting out to a member of the fairer sex. This allowed Saied to pile on the pressure at the other end (metaphorically), which was quickly rewarded with two wickets in the second over of his spell. The first was especially important as it removed SC Europa’s captain and came courtesy of a very good catch from Shane, moving away to his left at mid-off to catch the ball which came very quickly at him. The second wicket of the over, Saied sending one through the gate, meant that the Accies were now well on top with the score at 93-6.

However, Saied was not finished there, because in his next two overs he took a further two wickets, both of which contributed to the RMOTW (Regionalliga Motto of the Week, in case you’d forgotten). The first catch was very well held by Safi at deep cover after the ball stayed in the air for a long time. In the form that Safi is in at the moment, the other fielders were in no doubt that he would hold onto the ball safely. The outgoing batsman, Sami, simply seemed relieved that it was Saied that had got him out and not Tina. The second catch was arguably the easier catch, but was the epitome of another beloved cricketing motto, “Communication is Key”. After another one of Saied’s fiendish deliveries, SC Europa’s number 9 batsman succeeded only in skying the ball directly up in the air. In a situation that any cricketer is only too aware of, three fielders rushed towards the dropping ball and it looked for all the world that we’d end up with a classic THCC situation of three fielders in a heap on the floor and the ball falling harmlessly to the floor beside them. Thankfully, a very clear and loud call from Aswin, which was probably heard back in Klein Flottbek, avoided calamity and the ball dropped safely into his hands.

The Accies were now looking to finish the innings off, and they managed to do this in comprehensive style in consecutive overs. The first wicket came in Imran’s first over after he had replaced Tina, although maintaining the same action of left-arm over. Showing no signs of rustiness having stood fielding in the heat for over 20 overs, he took the 9th wicket of the innings when he had the SC Europa batsman caught by Shane at extra cover and finished his over as a very impressive wicket maiden. The THCC bowling innings then ended with a flourish as Sahil, SC Europa’s number 6, was trying to get a few extra runs on the board but didn’t quite manage to hit his cover drive far enough as he was brilliantly caught by Aswin on the boundary off the bowling of Saied. This was a particularly impressive catch as Aswin had to cover a lot of ground and ended up taking the catch almost over his shoulder. This also handed Saied his five wicket-haul, capping a very good individual bowling performance, but also a testament to the pressure built up by the other bowlers around him. The Accies came off the pitch very satisfied to have restricted SC Europa to 103 all out, especially since the total threatened to be much larger in the middle part of the innings. 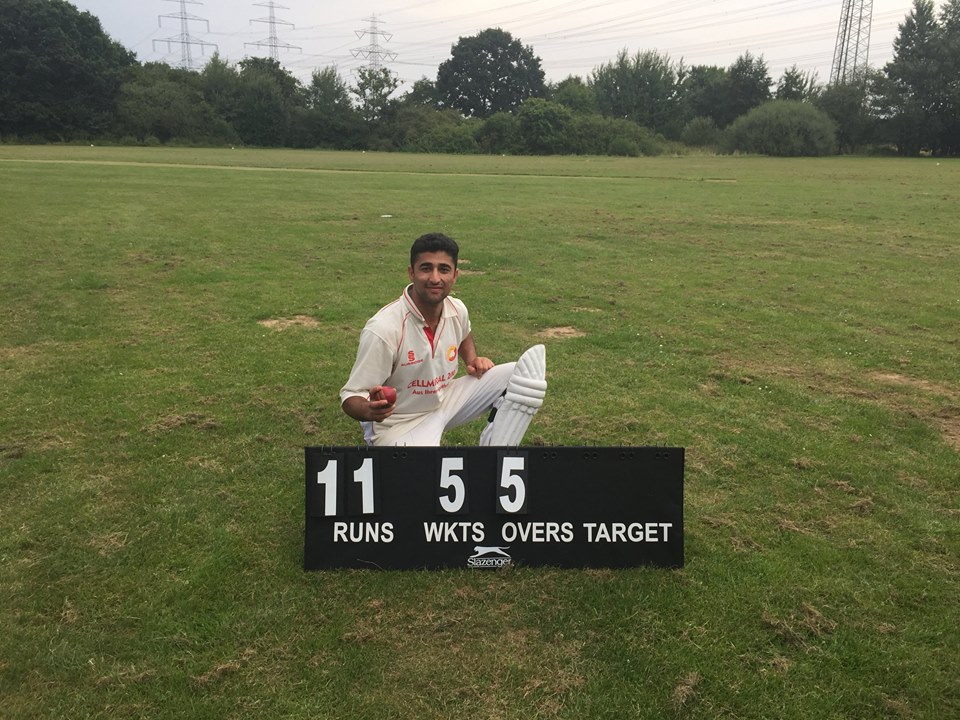 However, with last match’s RMOTW at the back of their minds, the THCC batsmen still realised that they had to apply themselves to reach the relatively modest score set by SC Europa. The innings got off to a less-than-ideal start as the Accies’ young opener, Mohibullah, was caught behind off the bowling of Sami in just the second over. This brought Captain Shane to the crease and he and the other opener, Safi, put on a very useful 45-run partnership. This included Safi hitting the ball to all parts of the ground and Shane striking some lusty blows through the covers which were appreciated by all of his team and the THCC supporter(s) on the sideline. This partnership lasted 10 overs (which was about the same number of times that Safi changed gloves) before Shane was comprehensively bowled by Hidiat, bringing Aswin “Safe Hands” Sivakumarr to the crease. Aswin ably supported Safi in building another useful partnership, before he fell to a catch in the covers, leaving the score on 78-3. It was during this partnership that SC Europa’s opening bowler, Sami, seemed to take a rest from bowling, before then coming back to bowl just an over later, much to the puzzlement of the scorers. This led to an unnamed THCC president sagely remarking, “maybe he wanted to bowl from the other end”. This would have been a very educated guess, were it not for the fact that both teams had been bowling from the same end all day. He’d obviously spent too much time sitting in the sun!

As THCC edged closer to the finishing line, Safi continued to anchor the innings with support from Imran, before the latter was bowled by Sami, who had come back on to bowl…from the same end. Safi soon followed for a very well-constructed 37 when he was caught in the covers. In true THCC style, the Accies were making things difficult for themselves and were struggling to get the final twenty runs required to win the game. However, the diversity of the THCC team shone through as Jens and Bakhtiyar took to the crease, two players on very opposite ends of the cricketing spectrum. Whilst Jens was stoically protecting his wicket and waiting for the bad ball, Bakhtiyar, in tribute to the recently-retired Tillakaratne Dilshan, attempted several scoops over the keeper’s head. The odd couple managed to nevertheless push the team closer to victory, with Jens showing the speed of someone half his age to scamper through for some tight 2s. When Bakhtiyar fell trying to play one extravagant shot too many, the score was on 96-6 and it fell to Khalil to finish the innings off with Jens. After Khalil scored a quick 7 off as many balls, the honour fell to Jens to see the team home, using all of his experience to expertly leave a wide ball to give the Accies the run required to win the game. The timing of the win was perfect as, not half an hour later, the heavens opened and a storm of biblical proportions hit Hamburg. Thankfully, at this point the players were all safely on the way home in cars and trains (incidentally, one of the safer places to be during a storm because the transport acts like a faraday cage, apparently. Cricket can be fun and educational…)

The fielding and bowling part of the day was especially pleasing as it capped off weeks of training and improved performances. However, the team knows that they will have to improve their batting performance in preparation for a return trip to Mümmelmannsberg in two weeks’ time to face a strong SC Europa XI side.

Thanks to Jens for providing the much-needed water, to Steve for scoring and supporting, and to SC Europa A for a great game of cricket in perfect summer conditions. We wish them well for the rest of the season. 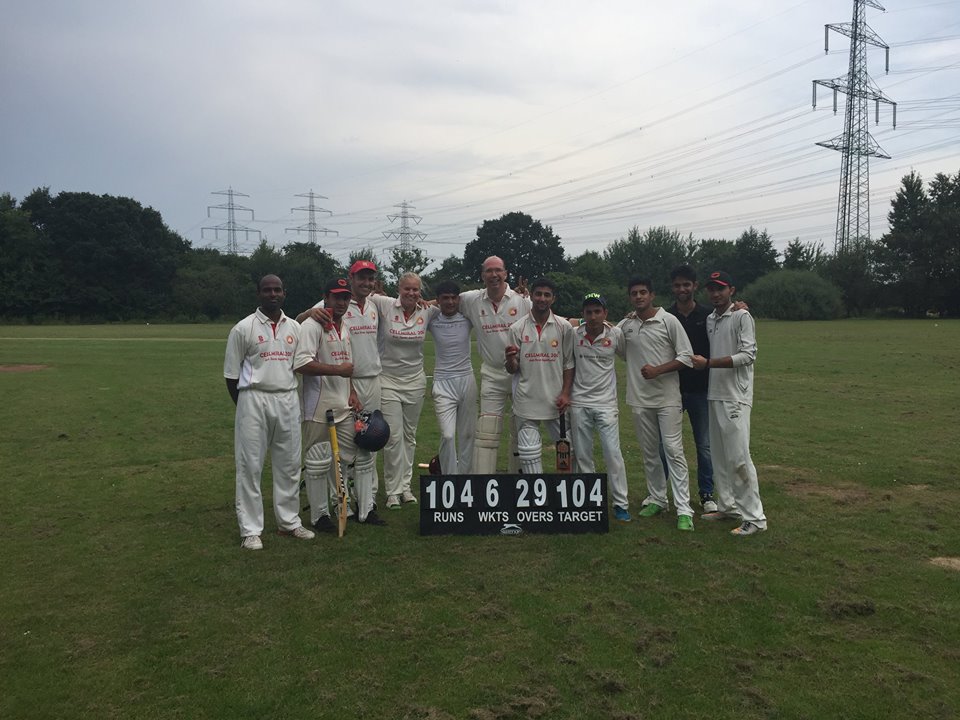 And that makes it three wins in a row!